This dessert has it all! Fancy, visually delightful, and layers upon layers of lovely flavor — all without being overwhelmingly sweet. I just ate part of one, and have to admit, I moaned a little.

Making German Chocolate Bombes was more-or-less an all-day/two day project, but it’s January and I’m in the house needing to bake anyway. I’ll show you how I did it. 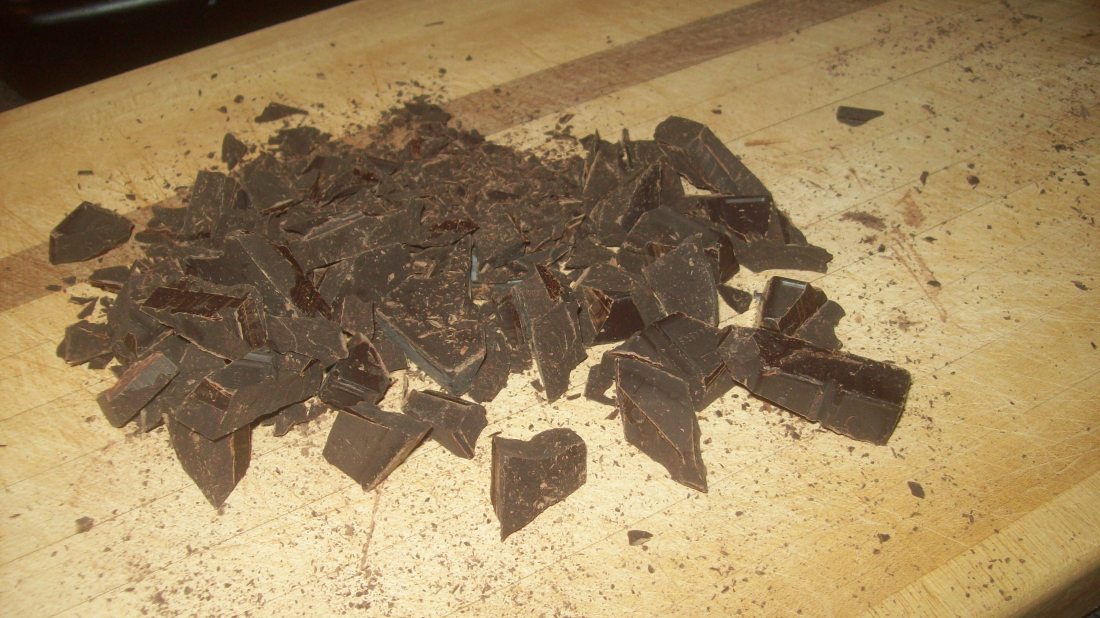 Chocolate and cocoa melt with the help of boiling water. 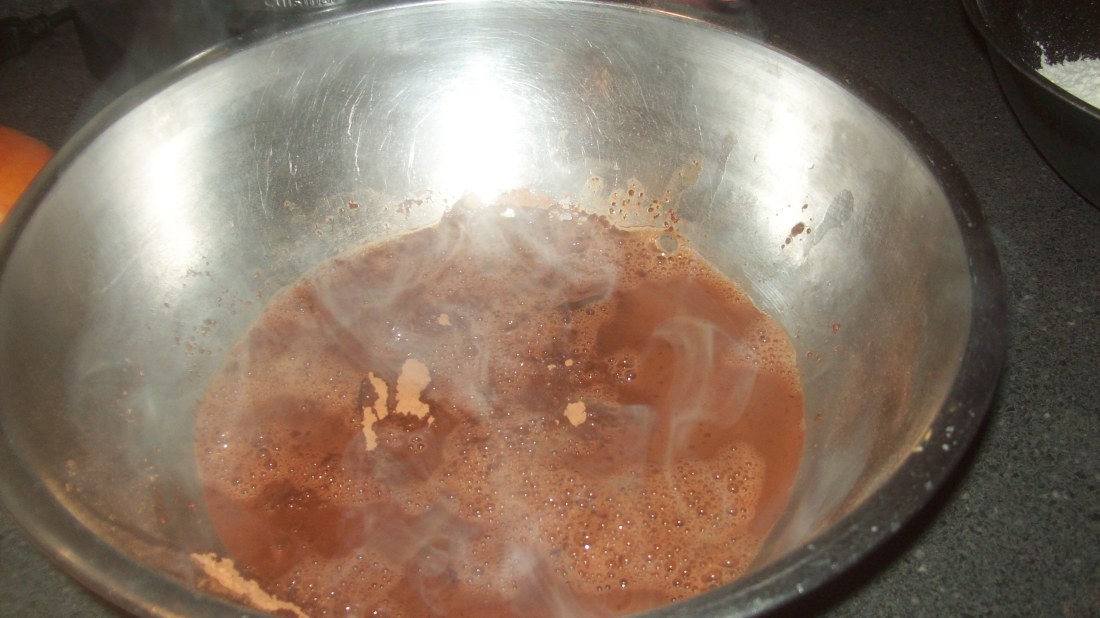 While that cools, cream some butter and brown sugar in the stand mixer. 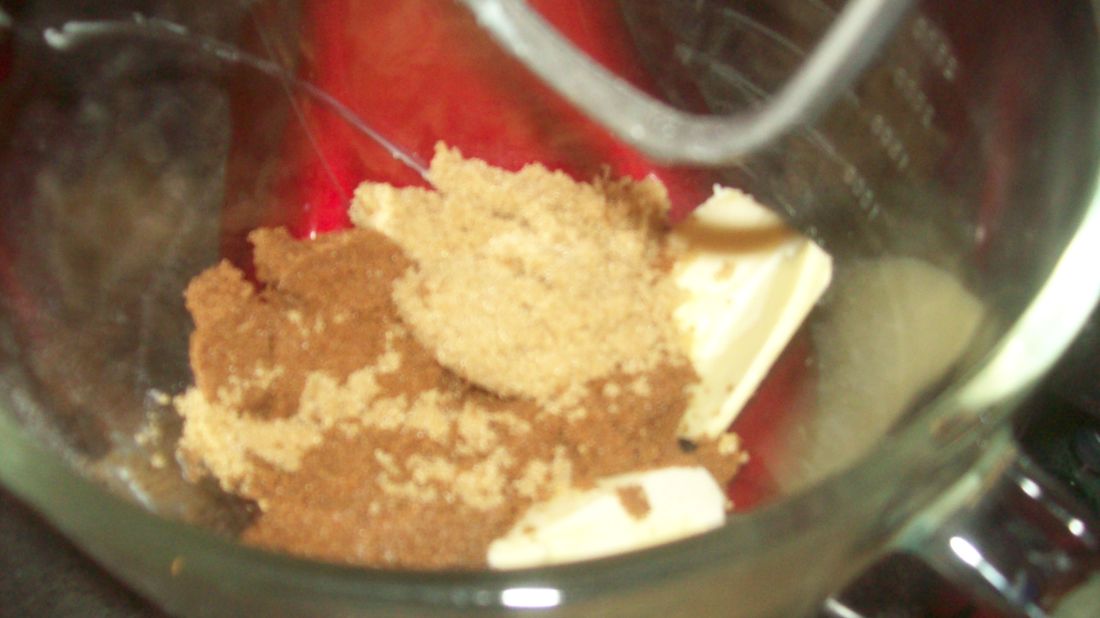 Cake is concocted with additions of eggs, buttermilk, flour, leaveners…

Here’s the finished cake. Lovely. Time to make the filling!

Process toasted coconut and pecans into a finer chop. 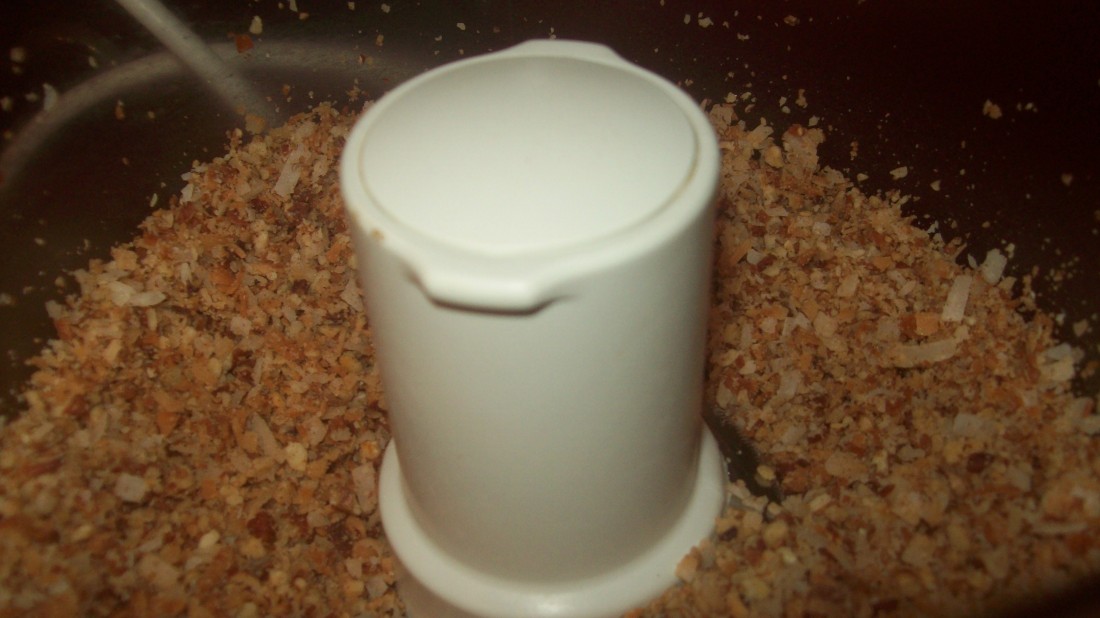 Beat the egg/butter mixture with the coconut and pecans. Filling — yum! 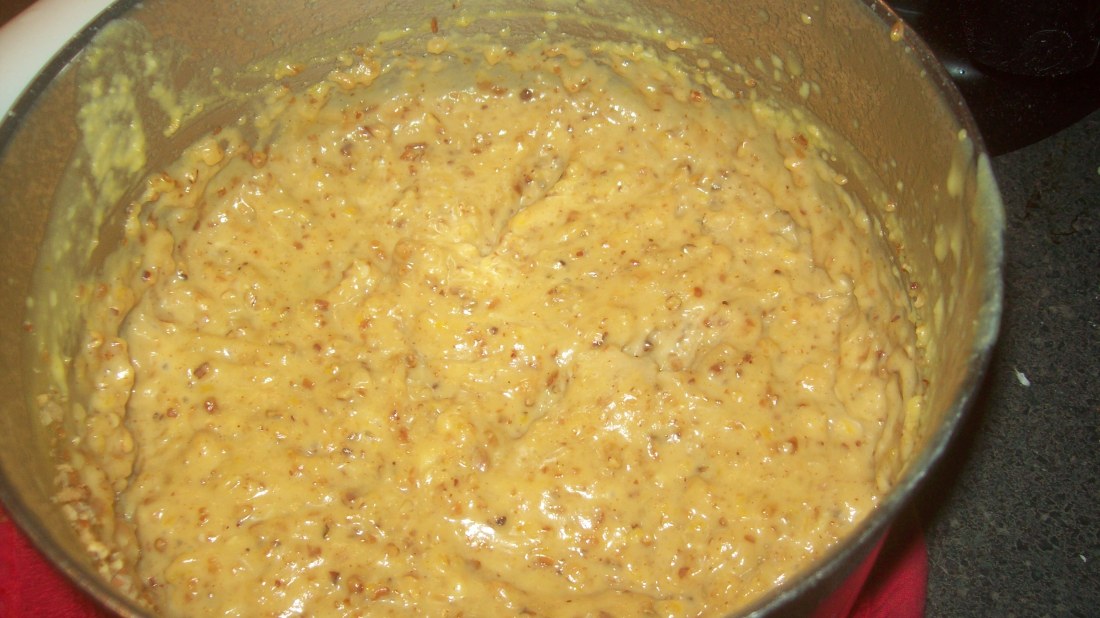 Next up, chocolate mousse.

Chocolate and butter melted together in a double boiler. Egg whites are mixed in the stand mixer until they’re stiff while the hand mixer whips heavy cream.  Here, the whipped cream is folded into the chocolate. 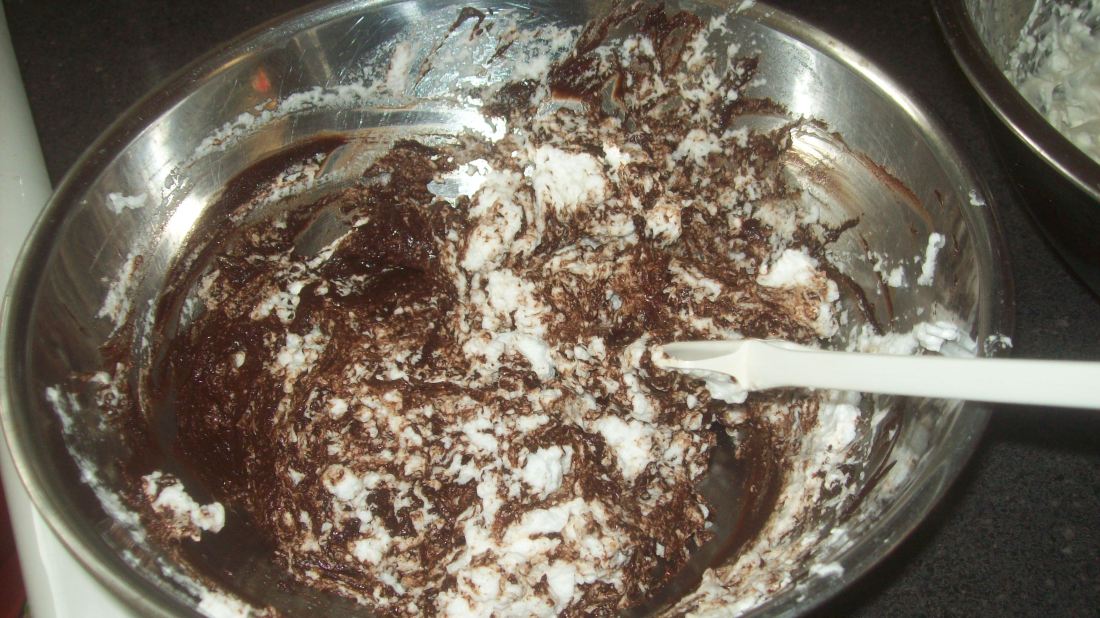 Then, the egg whites are folded in. At this point, fold and fold again, until no streaks of white remain.

Next, to start assemble the bombes.

The mousse is spooned into the molds and smeared inside evenly. The molds are frozen to set the mousse.

The frozen mousse is stuffed with the coconut-pecan goodness.

Finally, a round of cake is smooshed on top. I cut the cake with a cookie cutter. When I covered the filled molds with plastic wrap, I pressed down on the cake to squeeze everything together a little more.

Back in to the freezer! Overnight is good, but at this point you could freeze them for several days, making a fancy dessert available when you need it most!

Out of the freezer, the bombes are popped out of the molds on to a rack…..

And covered with a ganache made of bittersweet chocolate and cream. Voila! 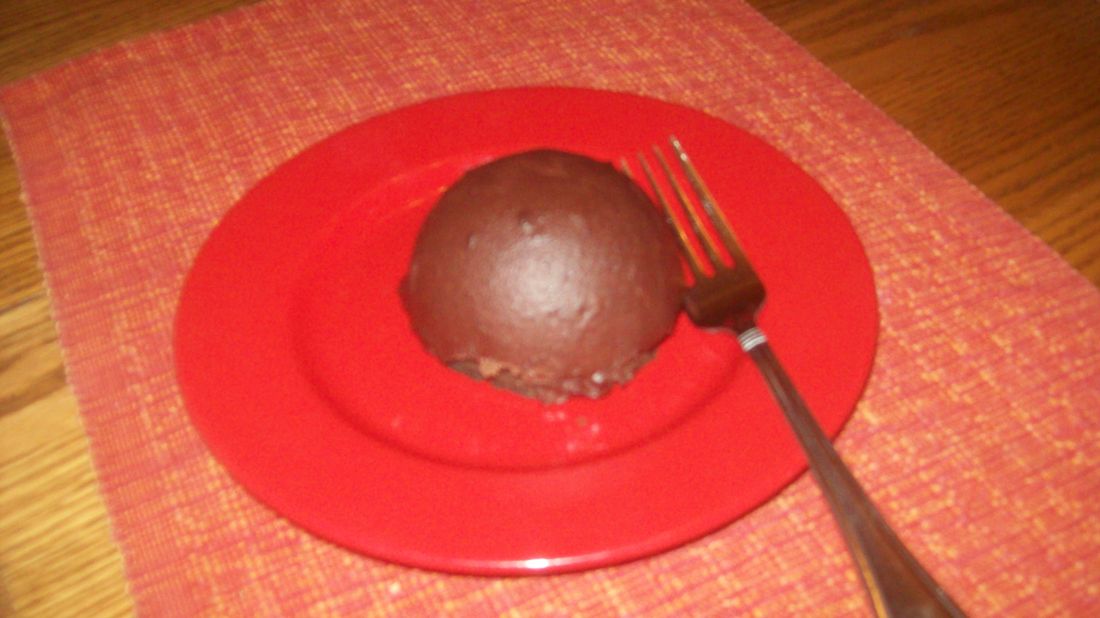 Fun fact of the day: the bombe was introduced as a dessert in the late 1800s. It was typically an ice cream confection and took its name because it was shaped like a cannonball.

You know you want one!

Massage therapy and baking: some people think it’s a strange combination, the way I make my living. But for me, it’s just natural.

Think about babies. Babies are very young, small people cleverly disguised in cuteness and need. A newborn infant needs a warm environment and love. Babies need to be held, cuddled, massaged, and given plenty of mother’s milk, and then they thrive, becoming children, adolescents, and beyond! The early foundations of touch and food form some of the basis for our structure, function, and emotional life.

Somewhere in the clover-leaves and labyrinths of my life, I discovered I was a nurturer. Maybe this came with the title Mom in 1985, but it wasn’t an instant thing by any means and certainly wasn’t anticipated — not by me, anyway!

In 1999, I found my way to a new career in massage therapy. I discovered it by accident — a thought dropped into my mind during a solitary walk around Mackinac Island. I had never even experienced a massage! It seemed a little risky at the time but I promised myself if I didn’t enjoy it I could stop. From the very first night of class in Ann Arbor, I never looked back. I loved learning anatomy and the systems of the body and how they interact. I loved practicing the different types of massage strokes and discovering how they could affect the various systems.  Working with individuals, helping develop treatment strategies for particular issues, and getting to know my patients was deeply satisfying. During a particularly trying phase in late 2001, I knew I had found my niche:  I realized the more I massaged and helped others, the more it relaxed and helped me. When I felt stressed and anxious, the best remedy was to get to work relieving stress, anxiety, and pain for someone else. Nurturing has this way of turning itself around, right?

I believe in the power of healthy touch!  There’s scientific evidence hugs help us live longer and better — and if you don’t already know, it’s also true for massage. The benefits of touch to the immune system alone are remarkable. Of course our bodies are systems within systems, all synergistic and searching for/creating homeostasis to keep us alive…. which brings us to….

2008, when I was recovering from a bone marrow transplant and unable to do massage therapy for a time. It was very hard — depressing, actually — because I did not see the people I’d become so familiar with and close to. I could not do the work that comforted and nurtured me, because working with others was strictly off limits. So I turned my attention to a love I’d acquired at the tender age of 8: baking pies. At first I just baked lemon meringue pies and gave them away. 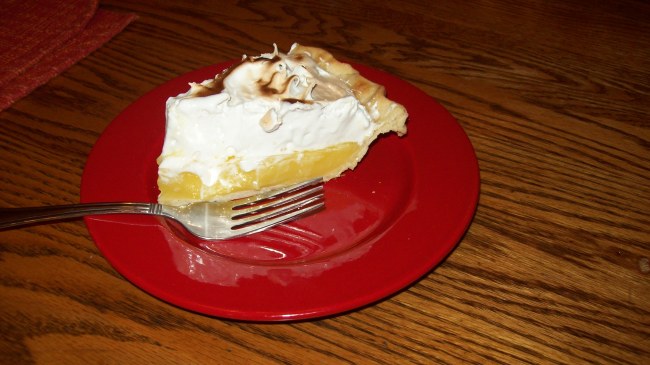 I started reading more recipes and baking all kinds of desserts: cakes, cookies, scones, muffins, cheesecakes, flan, bread pudding, you name it. I continued giving desserts away and soon, small orders started coming in. Goody Goody, my home bakery, was born. Goody Goody is for people who want something high-quality and delicious but don’t have the time and/or desire to create it — and I never mind if I’m not identified as the baker! I am constantly trying new recipes and still giving dessert away at every opportunity.

My work in the kitchen has become as comforting and fulfilling to me as my work in the massage studio — they are both opportunities to nurture, heal, and make someone smile.